It’s 6.30, the garden and surrounding fields are coated in a light mist. Kantcha, the dog is already up prowling around and barking his head off at anything that moves, which is mainly pigeons. Bisanti, the house mother, is the first one up and after a quick wash and brush of her teeth at the water pump she heads down to the cow shed. Her daughters, Chiring and Rupta, are close behind her, carrying buckets of water from the pump. I follow them down with another bucket of water.

The first task is to get the fire started to heat Seta, the cow’s, water. Kali, the buffalo, is happy with cold water but the cow will only drink warm water in winter, and who could blame her it is a bit chilly. I help the girls lift the tarpaulin up from around the shed and then we clean up the shed. I use the shovel whilst they use just a small wooden board to collect the dirty hay and big lumps of shit, quickly ducking out of the way as the buffalo decides to have a wee. 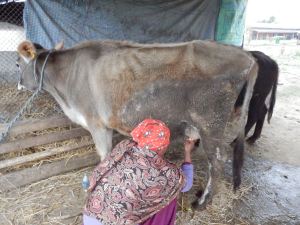 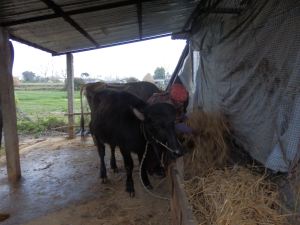 The girls then move on to tend the fire whilst Bisanti starts to milk the cow – she first fetches a small plastic bucket of water to clean the cow, the same bucket is then used to collect the milk. After washing the cow she uses oil on the teats first before she begins milking. A small amount of milk is kept for the morning tea, the rest is sold. One of the younger girls has the job of taking the milk, which has been transferred to a metal pale, down the road to a neighbouring shop.

I fetch another bucket of water to give to the chickens, I offered to feed them but now is not the time. 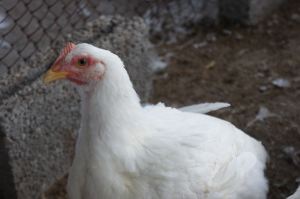 Chiring brings along the feed for the buffalo and cow – this is mixed in with their water and stirred up by hand. Whatever they don’t eat now is kept aside for their afternoon feed.

As I walk back toward the house, there are about five girls around the pump now. Some are washing themselves and others are cleaning their clothes including their school uniform; scrubbing them vigorously with a plastic brush. They work together, pumping the water for each other.

Now it’s tea time, which of course isn’t as simple as putting the kettle on and popping a tea bag in a cup. The milk that has been kept is heated up in a metal pan on the two ring burner in the kitchen, a bigger pan is on the second ring has water and tea leaves in it.  This two ring burner is the only stove in the house, it is gas so that it still works when the power is out, which is the majority of the time. 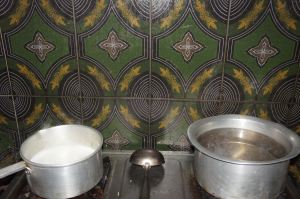 The tea and milk are then mixed together with sugar. I get my cup first as I prefer the tea without sugar and black, traditionally it is drunk very sweet. When it is ready we fetch the cups – metal beakers that are used for everything and one of the girls uses a ladle to pour the tea into each up passing it through a strainer first. Each cup is then placed at the benches around the dining room, a small room attached to the even smaller kitchen. 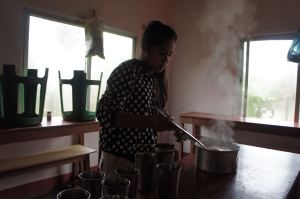 Everyone gathers in the kitchen to drink their tea. Some including Bisanti take it outside and enjoy a break for 10 minutes whilst slurping their tea and chatting away. 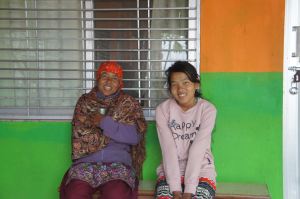 After tea everyone washes up their own cups, but the water has run out so they need to go down to the pump instead. We have to wait until the electricity comes back on at some point later in the day before there will be running water in the kitchen again.

As I’m helping to clear up I go into the kitchen to find one of the boys (there are only two boys here) has a chicken in the drain area – then I realise he also has a bloody big knife in his hand too.  I very quickly move outside before I hear the chickens final call. Now I know why there was no point in feeding them earlier!  I don’t want to see it but I can’t be too squeamish about it here – they have meat, chicken, once a week on a Saturday and in order have it they have to kill it – there is no supermarket nearby to get one from. I come back into the kitchen just in time to see the boy plucking the chicken, but I leave before he takes the innards out (OK so maybe I am still squeamish)! 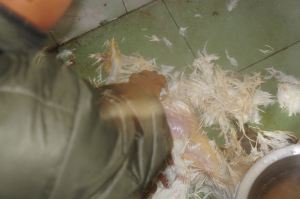 When I am brave enough to return he is burning the chicken on the open ring – I asked why, and it is to clean it. He puts the livers onto the ring as well – I’m not sure why – I should have asked, but he wasn’t very chatty, too focused on the task in hand. When he is satisfied it is clean he moves into the kitchen to chop it up. 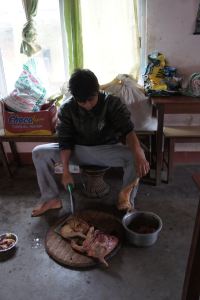 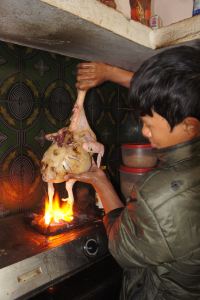 Whilst this has been going on the girls and I have fetched more water for Bisanti to use in the kitchen. And one of the younger girls, Bina I think is her name, has been preparing the spices, I helped peel the garlic then followed her outside, where she crouches down by a heavy stone board. First she works on the masala seeds, mixing them with a little water and rolls them, with a stone rolling pin, until it is a paste. Next she works on the garlic and lastly the chilli. When she has finished, she takes the paste into the kitchen for Bisanti to mix with the chicken in a big pot. The spices are freshly ground into a paste every meal time. 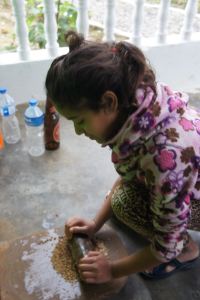 I keep asking for tasks to do – sometimes you feel a bit like a lost part as everyone has a job, though it is only day two so I expect to be able to get more involved each day. I am given a handful of potatoes to wash and chop up. I do it chunks, until the girl next to me stop chopping her onion to show me it should be in small slices – I try again – and this time Bisanti shows me what to do. I eventually get it!

Activity slows down in the kitchen as most of the children go back to their house, get on with washing their clothes or themselves by the pump. A few of us get into trouble from Bisanti – my fault,  I’m showing them photos on my macbook in the kitchen / dining room, and it clearly isn’t a place to play.

Bisanti stays in the kitchen cooking the chicken, adding in a load of freshly cut coriander from the garden. 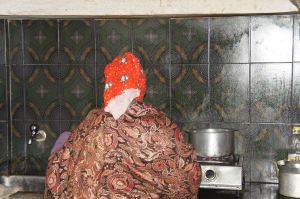 The huge pot of rice has already been cooked and is sitting on the central bench with a towel wrapped around it, keeping it warm. Sarinta, another one of the girls, is helping Bisanti now. I’m gradually learning the girls names – I’ve said I will try to learn two every two days – that way I have a chance of remembering them.

Once the food is ready, the pots are put on the central bench and Sarinta goes to call everyone in for Dal Baht (the name of the traditional Nepalese meal). As there is only me as a volunteer here today they each grab their plate and Bisanti serves them – if there are more volunteers we serve them. 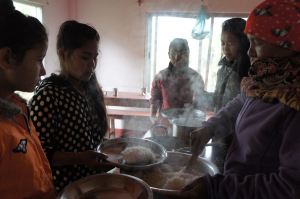 They don’t wait on ceremony to eat – as soon as they get their food the chow down. Some running in a bit later, but everyone stopping at the pump first to wash their hands. 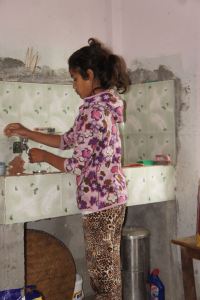 Some eat with their hands mixing everything together with the huge lumps of rice first, a few, like me use a spoon, either way they only using their right hand.

I soon realise that the potatoes were for me – Bisanti has made me an egg and spicy potatoes as I don’t eat chicken (I’m a pescetarian for those that don’t know) of course served with some rice and dal too. Thankfully the water is back on in time to do the washing up. Everyone cleans their own dishes and mucks in with the rest of them too – by 09.30 it is all done and dusted ready to get on with the rest of the day’s tasks.