Alf and I had a lovely few days on the beach and even better because it was so unexpected. The weather was lovely and I quickly rushed to set up camp so I could find the beach. I could hear the roar of the ocean but it took a few twists and turns before I could actually find it! And it was lovely to see Alfie have a little run on the beach. He is getting slower and slower so it was really great to see.
I spent a few hours paddling and sitting watching the waves and the little oyster catchers hopping around before I had to pop back to the van. But after a spot of lunch – delicious prawns and rose wine I’d picked up earlier we headed back to catch the sunset. I’m so glad we did – it’s truly magical to watch the colour reflect and change on the water and sand. There was only a few people around -a couple of ladies had been for a swim. I thought about it but after a paddle decided it was too cold for me.
Back at the van I indulged in a session on Netflix – I’ve been pleasantly surprised to be able to access to it at all but it’s not all the time so I owe indulge when I get it.
Sunday was my first day off – with no driving. It was a really foggy start so I headed back to bed for a bit – the roof tent really is quite cosy whatever the weather. Alf was delighted with chance of lay-in and snored on all morning. I eventually got up and did some hand washing – so at least I didn’t feel totally lazy and wrote my last blog post. By one the sun was out and it was warming up – so we headed back to the beach. This time with provisions – some bread, cheese and some rose. The afternoon was spent reading, thinking, watching and wandering along the shore. I was going to stay for sunset but Alf was getting hungry (which means he was being annoying!) I’d also forgotten a sweatshirt and it was rapidly getting chilly. So I headed back to Beryl, via the empty but open bar / restaurant for a mojito. It wasn’t the best so I stopped at on.

My original thought had been to move on Monday, but I decided to stay where I was. I took the opportunity of good showers to top up the pink in my hair and then went off to explore the island. It really is pretty – lots of cycle paths through woods, some small vineyards, beautiful beeches and whitewashed bungalows with sage green shutters. It was also pretty deserted – I can imagine it’s heaving in summer, so whilst nearly everywhere was shut I felt lucky to experience it like this.

Once I got back to camp I spent nearly three hours on chat and the phone to 3 mobile trying to get my sim in my mifi to work. No luck yet I’m just not getting any signal – I’m going to keep trying when I move on and give them a call again if it doesn’t pick any up. In the meantime I’m reliant on campsites and McDonald’s. I don’t go into McDonald’s but they have great free wifi and I’ve downloaded POI’s into my phone.
On Tuesday morning – a week since I left the UK I left Ile De Re and headed into La Rochelle. I had to drive by a few car parks until I found one without a height restriction. It looked like a great town so I put alf in his back pack for the first time and headed of to explore.

Unfortunately as I walked out of the car park I saw a height sign at 2m – Beryl is 2.1 – shit. Did they have a barrier at the exit? It didn’t make sense here was also a picture of truck. I decided to deal with it when I got back.

That was the wrong decision. I couldn’t relax – being anxious about getting out of the car park also made me anxious about getting lost. Silly really because if there was going to be a problem it would be there at any time and worse case somehow i could surely drive out the entrance. But I could totally relax so I had a little walk around and a spot of lunch and headed back. I walked over to the exit – there was no barrier – if only I’d done that to start with!
But it turned out fine – I had a little drive around and saw a bit more of the impressive town, then headed towards Rouchefort – well just past it to an aire in Soubise. It was along side a river and in the town – so pretty and handy. There were only a few spots left which filled up pretty quickly after I got there so perhaps the day worked out for the best. After watching a game of boule Alf and I wandered into the village and I’m now sat outside a little bar, next to a huge pot of chrysanthemums, writing this drinking a beer. I’m happy, Alf however is a little pissed off he had a dodgy tummy earlier so he’s not getting any dinner and is not at all impressed!

P.S I had to drive over two bridges today – of course back of the first one and then another this afternoon and again I was relaxed no irrational fear. I know I mentioned it in the lard blog post but I’m so pleased that it’s wasn’t a one off I had to mention it again. Next challenge mountain roads – I’m going to look on the positive and assume that I’m over my fear of these too. I’ll let you know.

PPS. I do have a great pic of alf running on the beach but I’ve  just for wifi on my phone so rather than wait I’ve posted with the pics on my phone – I’ll update later 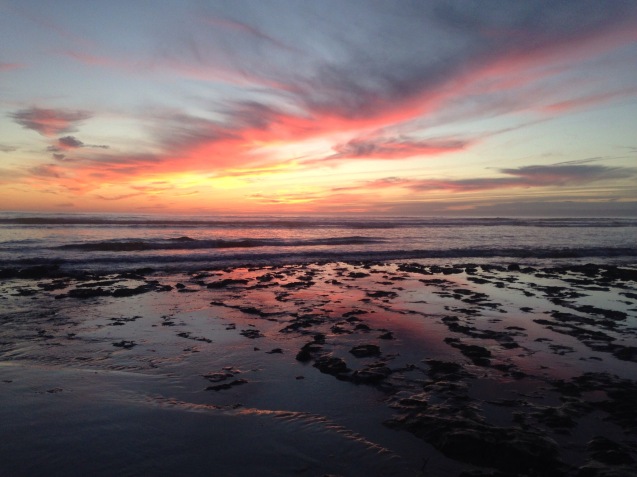 3 thoughts on “Running free on the beach”