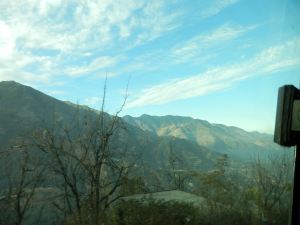 After a couple of days exploring Kathmandu it is time to head to the Happy House in Chitwan. From what I gather the Happy House is like an orphanage but with one main difference, most of the children are not orphans. They all have different backgrounds but the main theme is that their parent or family don’t have the money to look after and educate them. At the moment there are twelve children ranging from eight to fourteen – mainly girls with only two boys.

The morning starts at 5.30 – we are being picked up at 6.30 to get the bus. By we, I mean me and three young volunteers from China. I’d spent some time with Jo Jo the day before, she is sweet and quite funny – her English is pretty good though she doesn’t think it is. There are two others who I don’t really know they arrived last night. But JoJo has said they want to get the bus with us – so I can guide them all – they are worried as their english isn’t good enough. This is a bit of a worry, I have suddenly become responsible for three Chinese volunteers and I have no idea exactly is happening!

We get picked up about 6.45 – of course it is Nepali time – Batwan, our driver, explains that it’s no problem he can call the bus driver – he can’t delay planes but he can delay buses. When we get to the bus station we chuck our bags in the back – mine weighs an absolute ton as well as my gear it is full of books and pens for the children. At least when I leave it should weigh less.

The driver explains to Batwan, who translates to me, that we will have to change buses in the main town – what town I have no idea. I make sure that I get the address of where we are going and the number for the house mother from Batwan – thankfully I sorted out a local sim card already.

The bus seats are a bit busted but thats OK – mine is actually in a nice reclining position. I huddle down under my new warm jacket, with my fleece across my lap, and put on my an audio book – Jo Brand’s latest. Far better than trying to read a book on a bouncy bus. It takes quite a while to get out of the town but eventually we end up winding down a mountain – you can see the road snaking around in curves through the plush green countryside. I doze on and off. I never used to be able to sleep when travelling but I am getting increasingly better at it – which is very handy as we are on the bus for about 6 hours.

There are a few rest stops where you can get noodles, snacks and of course sweet tea. The loos along the way are surprisingly good – one even had a proper loo.

We eventually change buses which goes smoothly – our connecting one is waiting for us, that wouldn’t happen at home. The second bus is a bit more dilapidated than the last one – but it is has free wifi that works. It says something when basic tourist buses going deep into the countryside in Nepal have free wifi but go to a posh hotel and you will most likely pay at least £5 for an hour. This bus takes us further into the countryside – we are now well away from the himalayas and surrounding hills, the land is flat but lush green with houses dotted around – some concrete others more shacks than houses.

Before long we pull up at a village – definable only in that there are a few shacks selling goods and a school. The house mother and a couple more volunteers from China are there to meet us. They have two bikes between them on which to put our luggage. But thankfully Assam, the man who owns and runs the whole volunteering set up and the Happy Homes arrives with a car. We manage to squeeze all our bags and me into the car. It is a bumpy 10 minute or so drive down a dirt road and off a shorter dirt track – to the house, the biggest in the row. Assam explains the surrounding houses are the homes of the richer villagers – they don’t look that rich, it is going to be interesting to see how the others live. I also understand that the money from the volunteers also pays for the ongoing costs of the Happy Home – which is nice to know, though I am sure that Assam takes a good cut first.

First impressions are that it is colourful; the main house is pink and the building where the volunteers live is bright orange and green. The garden is also brightly coloured with a buddha and a few other figures in it. The accommodation is basic – but thats what I expected. I am in a simple room with two beds – I will be sharing with an English lady who is here for few months – but she is actually away at the moment – I will meet her next week.

The children were still at school when I first arrived. But they were back before long and get on with their homework.  They all seem very nice and well behaved and I am sure as the days go on I will get more involved. Soon it was time to help with dinner after which we watch a bit of TV (they only watch it for an hour a day if that – depending on power) with the kids but we call it an early night before dancing tonight as everyone is tired, me especially, after the days travel.

3 thoughts on “Arriving at the Happy House in Chitwan, Nepal”