This is it, I’ve finished work, the sabbatical has officially started and full time the preparation has begun.  Full time with the little break for essentials like a swim and sauna and lunch with friends!   There is actually a lot to do and setting up this blog is one of the big jobs.   But I’ve got a few weeks until Alf and I head off so we will get it sorted in time.

I am having a few problems with gas though which is causing me some concern today.   You might think that it would be causing concern to people around me too – but this time it isn’t a problem with my gas – but a problem with Beryl’s.  I currently cook using calor gas but thats no available in Europe – so I thought I could just change over to a different type that can be refilled easily in Europe.   But its not proving that easy.  I’m sure I will figure it out.

A lovely surprise today was finding out that Alfie has won a free photo shoot after being selected from over 70 other dogs on Facebook.  So I’ve delayed his pre-trip hair clipping until afterwards.  I’ll share the photos when we get them.

The bike and Alfie’s trailer have gone up on the back of Beryl for the first time and it all works pretty well – and seems fairly easy.   I’ve just got to get to grips with cycling after a long break and more importantly get Alfie comfortable with the trailer – fingers crossed the recent bike therapy will pay off. 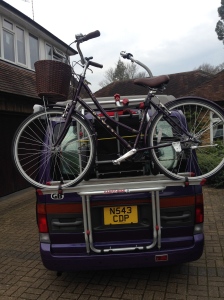 The bike and trailer loaded up for the first time