Last weekend I visited Chitwan National Park in Nepal for the second time. When I was there a few years ago I had a brilliant time and one of the highlights was going on safari riding on an elephant. I had been looking forward to doing the same again, but once there I quickly changed my mind.

I’m kind of ashamed to admit that when I was there before I didn’t really think about the impact on the elephant.  I didn’t think about it this time either, that is until I had several elephants standing in front of me who were obviously in distress and had their front legs tightly hobbled together. 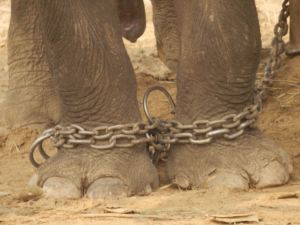 These were two massive male elephants and our guide explained that they were in musth and therefore for dangerous.  I could hardly look at them and didn’t want to take photos as it was so distressing to see these big beautiful intelligent elephants barely able to move, swaying from side to side and having to hop to shift position. 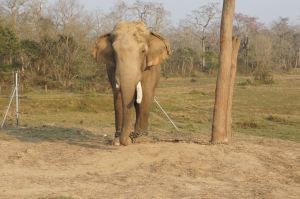 I noticed a couple of western women with wheel barrows so I went to ask what they were doing. They were volunteers for Elephant Aid International (http://www.elephantaidinternational.org) and explained that they were building corrals so they elephants could be freed from the chains forever and given a space of their own to roam in whilst not working. Ideally elephants would not be used for tourist experiences but in the meantime this work will release them from the pain of being chained up every night.

It was great to listen to the volunteer, but then she called over Carol Buckley who created and leads Elephant Aid International. It was enlightening to listen to her. Her involvement in elephants started about 40 years ago when back home in Tennessee she met an elephant called Tara. It is interesting that she then spent the next two decades, traveling throughout the world “entertaining” audiences but has since changed her views that using elephants as entertainment is not right. It reflects a similar journey that Rick O’Barry had with dolphins. He was the trainer for the dolphins used in the film flipper which effectively started the whole use of dolphins in entertainment industry. Rick has now dedicated his life to trying to keep dolphins free from captivity and to stop the slaughter of dolphins particularly in Taji, Japan. It looks like Carol has equally dedicated her life to protecting and saving elephants. Tara, her original elephant now lives in a 2700-acre natural habitat refuge in Tennessee, with other elephants that Carol has helped to save.

In Chitwan, the project that Carol and the volunteers were working on is called ‘chain free means pain free’. There are similar projects to build coralls in Thailand as there are here in Nepal. Not only do they need to build the coralls but the fact that the elephants are in a wider space it creates more work and they need more equipment to help the mahouts look after the elephants.

The issues are not just that the elephants are chained up at night. It starts when they are either captured from the the wild or bred in captivity, where the babies and their mothers are both chained up (I saw this on my last visit but opted not to go to the breeding centre this time). It then progresses to the way the elephants are trained to be able to work.

Elephants are a lot like humans. They socialize, have families and friends, feel pain, sorrow, happiness and more. Sometimes, depending on where they are working, they end up living essentially in solitary confinement. The next issue is actual act of carrying people on their backs, their spines are not made to support the weight of several people all day on their backs, it can lead to permanent spinal injuries. If they are lucky and that doesn’t happen, simply having the chair or howdah on their backs can often rub and cause blisters which can get infected. 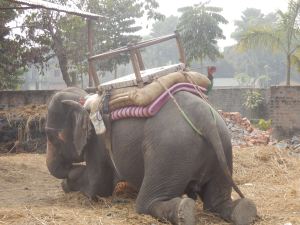 I feel privileged to have had the opportunity to meet Carol Buckley and that she spared the time to explain to me and my fellow travellers about the work that she does and why.  I’m a bit in awe of people who find something that they are so completely passionate about and they dedicate their life to the cause.  Since the weekend, I’ve done a little bit of reading up and have shared below links to some of the sites I’ve been looking at, I will look into it further once I’m home.

I have thought long and hard about volunteering to help build the corrals. I even went back to talk to Carol, which is when I took some of these photos so I could share them here. The only availability is a two week slot starting the day after I finish my current volunteering project and this it would be hard manual labour.  I’ve decided not to do it at this time, but I will make a donation to help build the corrals and equip the mahouts so they can better care for the elephants in their new expanded space.

I’m not going to preach to anyone about not riding an elephant, especially not in this blog, I’m writing this to share my experiences, impressions and views, not to tell people what to do.  Personally, I am going to make sure that I always think about the animals involved in any activity I take part in and understand  the implications on them so I can make educated decisions.

I still had a brilliant time on my second trip to Chitwan National Park. I was there with Yvonne, my fellow volunteer from the Happy Home, and we were joined by five other volunteers, who within no time at all it felt like we’d known them for ages.

On the way to the hotel, we saw a huge line of dancers in different styles of traditional dress, this was all part of a big food festival that was happening that weekend. 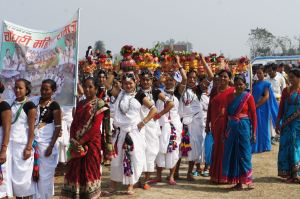 Later that first day, after the visit to the elephants, we drank cocktails whilst watching the sunset over the river and national park.  After a meal, that for once wasn’t Dal Baht (whilst I’d enjoyed the traditional nepalese meal having it every day for breakfast and dinner is wearing a little thin now), we sat by an open fire for a bit before heading to bed.

Saturday mornings canoe trip was through thick mist, which created a very atmospheric journey.  The walk back through the jungle afterwards was great and whilst I would have loved to have seen at tiger (we saw tiger poo and claw marks) I’m glad I didn’t see one whilst on foot!

Instead of the travelling by elephant for the safari in the afternoon I opted, with one of the other volunteers, to go on a longer safari by jeep. We were very lucky and saw a rhino, several sloth bears (no pics I’m afraid they were either too fast or too far away), crocodiles, deers, two huge pythons, peacocks and stalks. 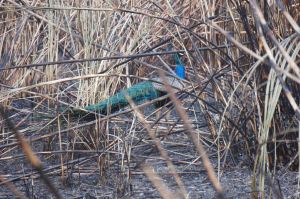 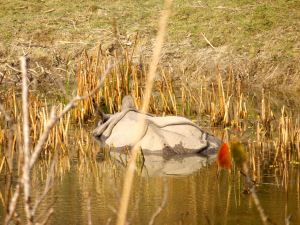 Whilst seeing all these animals was fantastic, the biggest success of the day was probably the fact that I climbed in and out of different canoes eight times and didn’t fall into the crocodile infested water once!

On our last night we went to the Food Festival and had some delicious banana momo’s and other tasty delights, of course all washed down with a beer or two! 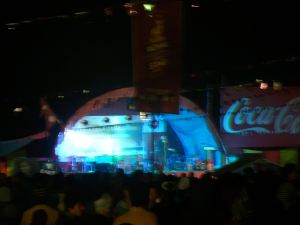 As well as a wonderful weekend it was interesting to see how much this part of Chitwan has changed since I was last there, all as a result of the growth in tourism.  This isn’t necessarily a bad thing, except for the elephants who have to literally bear the weight of the additional tourists.