The drive from Dan Helder across to Dan Oester took me over a 20 mile stretch of road.  A road that sat on its its own in the middle of the water – it wasn’t a bridge because it wasn’t raised (though there were bridge sections at the beginning and end) just a road with water either side – a bit strange.

I had planned to stop overnight near Giethoorn Village in the Netherlands but Instead I decided on a short stop instead so I could go straight onto Germany.  Giethoorn Village is a car free town – which is why I didn’t see too much of it from Beryl! It’s known as the Venice of the north – you need a boat rather than a car. I tried to find where I could go for a boat trip but couldn’t see anything.   As I was feeling a little rough with a cold I grabbed lunch and got on the road again. Of course I then saw where the boats went from and got a brief look down the small canals.

It looked so peaceful and pretty but I’m afraid I didn’t stop. I probably should have, but I had another few hours drive and wasn’t feeling up to it. I might come back on the way home.

I can’t possibly finish my posts from the Netherlands without talking about bikes. I knew before I came that people cycled a lot but it’s different when you see it – they are everywhere.  And it is great to see them being used instead of cars and but it is made so much easier with cycle paths everywhere.

In the main the bikes are the same – big tall sit up and beg bikes. Some people have their child on the back – some in proper seats, though I did see a few just sat on the luggage rack. A few have a younger child riding on a seat at the front over the bars and some have two kids one on the front and one the back. Then there are the bikes with big wooden carriages on the front for several children to ride in. I also saw two people on segways type contraption pushing a trailer of children.

Then you have tandem bikes and lay down bikes – even lay down tandem bikes. I even saw someone on a lay down type bike reading his book whilst cycling – show off!

With all this cycling going on – have I been out on my bike yet? I’m ashamed to say no. I wanted to wait until Alf was settled because it’s not his favourite thing in the world (a bit like going to the vets and having a bath at the same time x 10!). Dan helder would have been the perfect place but I chickened out – my excuse was my cold I just didn’t feel like dealing with his barking and therefore being the loudest biking combo in the Netherlands. I did go in the bike in Wiesta – more on that later.

I also realised as i was driving out of the Netherlands that I’d miss all the water – you are never far from a dyke or canal. But as I entered Germany I realised that I had not seen many trees for a while and it was so good to see them.  I was heading into serious farming country – and we aren’t talking flowers anymore.

I think it was pretty easy for Joob standing outside the house as I came up the drive in Wiesta.  I guess a purple campervan is pretty easy to spot coming up the road!

Within 10 minutes Alf and I were happily sat it he warm and cosy kitchen having a beer with Joob, Antonius and their neighbour. Early evening Joob, Millie (his dog), Alf and I headed out for a  stroll to the hut.   Alf was rather taken with Millie – I think we might have trouble when Alf, Leo (Mum & Dad’s dog) and Mille are all together in July. 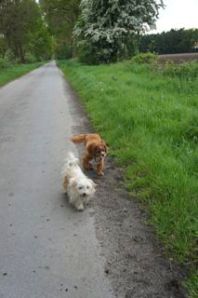 The hut is a picture prefect log cabin in their own woodland.   It really is one of the most peaceful spots in the world as well as a great place for a party – which I can vouch for having spent a new years eve there some years ago.

I can see why Mum and Dad love it here.  Not only the wonderful people, the countryside and there is of course their very comfortable beds which Alf and I snuggled up into later.   I did take Alf’s little bed up but he took one look at the massive empty half of my bed and snuggled in – sorry Joob but I didn’t have the heart to move him.

It was great to have a few days chilling out, with some lovely long soaks in the bath and a visit to Hermen and Christina, their daughter Theresa who live (part time I think) in the very old farm house.  Its a beautiful old house – that takes a while for your eye sight to adjust when you go in it is so dark.  They have been camping in Sweden quite a lot and were able to give me some recommendations for campsites and places to visit – which was really helpful. 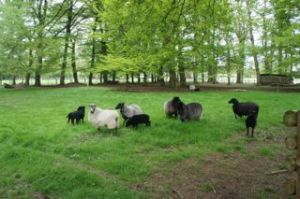 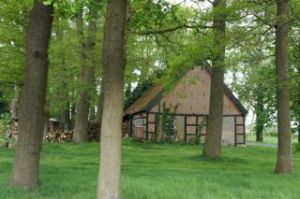 We also went out to visit Huvener Muhle, where there is a very beautiful and old windmill – one that works both from the power of the wind (of course!) and water – which makes it pretty unusual.   After a great big slice of black forest gateau and coffee we headed on to Sogel.  In Sogel there is an old hunting lodge which is in fact 6 lodges – one in the centre and the others in a hexagon shape around it.   One of the building is in fact a church with skeleton under the alter – a bit strange! 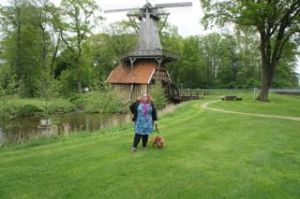 I said I’d come back to the bike a bit later.   I had the option to leave the bike and trailer in Weista.  It would be a shame to do it as I would like to use it but it is also a bit of a pain to have on the back of the van.  It makes it difficult to open the back door and reduces visibility.

The only way to know what to do was go for a ride.  I think Joob thought I might be exagerating how much Alf hated being in the trailer – but he quickly saw that I wasn’t!  We first cycled to Hermen’s in the morning, which really isn’t far, but far enough with Alf’s barking!   Later on we thought we’d give it one more try.  This time we got Alf to run along beside with Millie as we cycled to the hut.   I don’t think Alf has run so much in years and funnily enough he was walking better on his arthritic leg when he got there than the day before when we’d walked.  The plan was that he would be tired and would be happy to get a ride back.  Joob and I thought we’d sussed – but no Alf felt exactly the same as ever.  We even tried Millie in it – she agreed with Alf – it was thoroughly awful!   Decision made – the bike stayed in Wiesta – along with the helmet and locks etc which did free up a bit of space in the van.   We will try it again in July when we return. 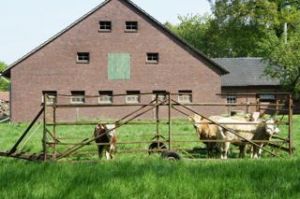 After a brief but very enjoyable break in Weista it was time to hit the road again and make my way further north.

The first stop was Luneberger Heidi – which the book describes as a remote enticing heathland and nature reserve.   On the way there we stopped in place called Verden an der Aller – which is known for its attractive churches and cathedral – which was unfortunately shut so I couldn’t have a look inside.  It was an attractive town – with distinctly german buildings but very for some where quite large. 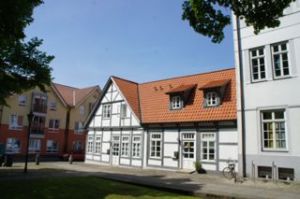 The campsite in Luneberger was lovely with truly outstanding toilets!   They would have fitted in well in a five star hotel – instead of the usual shower cubicle you got your own bathroom with double sink and bench, double shower and private loo – total luxury for a campsite. 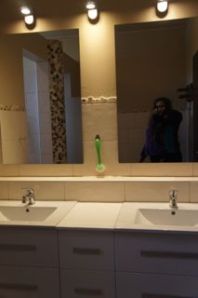 The next day we headed in to the heidi, the heath land.  The area reminded me a lot of the New Forest.   Unfortunately the heather is only out in August so I could only imagine what it would look like in a variety of shade of pink and purple.  After a walk around we hired a horse and cart from a young lad to took us out on a ride for a bit of fun.   Bless him he kept on trying to give me the tourist spiel but I didn’t understand German and his English wasn’t great.  I felt bad because he was apologising, why should  he – I was in his country he shouldn’t feel any obligation to speak english.  That said I’m extremely  lucky that nearly everyone I’ve met has spoken English.

Before I headed onto that nights stop – I decide to visit the village of Wilsede, which mu book described as a tranquil scenery and quaint houses set among tress is a reminder of its bucolic past.  What the book (back roads Germany) failed to mention is that there isn’t an actual road there.  It starts out as back road (living up to the books name) – then it changed into a cobbled road – very very bumpy – and next minute there was only a dirt track. 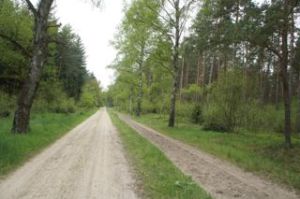 I couldn’t really turn round and it was sandy the other side so I just kept on.  Off-roading can be fun – but I wouldn’t recommend it in a camper van!   The village when I got to it was very pretty but I’m afraid I didn’t stop – silly really – but I had been so (literally) shaken by the journey there I just wanted to get back to a main road.   There also weren’t’ any other cars in sight – just people with walking sticks, hmmmmm maybe that was telling me something. 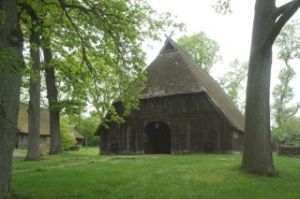 The next stop was Plön which the Tom Tom said was 3 hours away – a bit further than I hoped but not a problem.  Then the Tom Tom offered an alternative which was only 1 hour 45 away. I went for it of course.  Now given that I always select “avoid motorways” I didn’t expect to then end up on the autobahn.  So in about 15 minutes I went from dirt track to autobahn – talk about extremes!   I got off the motorway quickly, I’m into cruising not speeding, the tom tom soon sorted itself out.  Well that’s what I thought – until it decided to take me (I’m sure as a payback) right through the centre of Hamburg.  Let’s just say that by the end of the drive I needed a couple of beers.  But it was all worth it, and part of the adventure – at the end of the day I was sitting by the lake in Plön looking over at a huge castle (and swatting away the VERY annoying sandflys!). 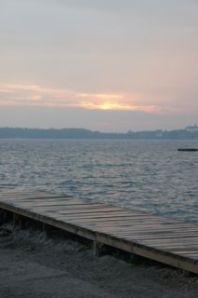 3 thoughts on “Down on the farm in Weista”