Today started out as normal for life at the Happy House but it ended up out extraordinary. It began with the usual routine of mucking out the cow & buffalo shed, helping with water, tea and preparing and eating Dhal Baht (traditional Nepalese meal; dal, lentil soup, served with rice and a vegetable dish) and cleaning the children’s house out.

After we’d finished the mornings chores, I went for a little stroll down the lane and noticed that people in one of the homes opposite were all gathered together and the ladies were dressed up in beautiful red saris. Bisanti, the house mothermlater explained that it was a hindu celebration today and she / we had been invited over later. How exciting.

Before our visit we spent a good while chopping up the radishes that we had picked the day before – huge white radishes that we cut into thin slices which will be dried in the sun. I think some will be used to made it a pickle, others kept dried and rehydrated when used. It was actually quite therapeutic to sit out in the sun chopping.

When we got to the neighbours the women were all seated in one area and the men in a another. As usual people were looking at me, whilst there are other volunteers with us today they are Chinese and I stand out more than they do; not just because I’m white and have bright pink hair, but I’m fat and loud. They are fascinated by my size, as are most people when I travel, I accept it because it is usual but after a while it does where a bit thin, I’m not at that stage yet though so it is OK. But this is the first place I’ve been asked numerous time about how much I actually weigh, I don’t know the answer which they can’t quite understand. 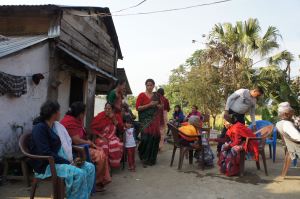 In between the two groups were two old ladies, one I had met the day before who is severely hunchbacked, she and her friend were just sitting their nattering away.

Later one of the other women came over and wrapped the old hunched lady up in her shawl. One man had a bowl of money and flowers with him. It was simply fascinating to watch everyone.

Before long we were given some food, it was delicious. Bisanti’s food has been great but it was nice to have something a little different. This rice had been mixed with milk, and tasted ever so slightly sweet and was served curried veg. We were given a glass of water, which I decided not to drink, I didn’t have my bottle with the filter on me so best not to. No sooner had we eaten than Bisanti was ushering us all out – it felt a bit rude to eat and run but she knows the custom and we were asked to come back later for music and dancing.

Back at the house I find out that there is another celebration going on over at another house over the back, it is at one of the children’s teachers house. So after helping to water the garden we all head over there. Clambering through a gap in the barbed wire fence and then walking on very thin paths around the fields. Fields that in the summer are rice paddies, but right now there are patches of pretty pink flowers growing. I must find out what they are, i”m sure there is a practical use for them. It looked wonderful to see the long line of the children walking through the fields ahead of me as the sun was setting. I stopped to take a picture but then had to try catch up – whilst going slowly and carefully, my balance is not the best so rushing would have been not helpful.

When we arrived at the house a lot of people were gathered around an elderly lady. She was sat on a chair and had what appeared to be a wreath of grass and money round her neck and a big yellow dot on her head. Everyone else had red dots – in fact they were more like streaks of red down their foreheads, I had one as well from our earlier visit to the neighbours Another elderly lady was putting the yellow paste onto the lady in the centre of all the activity’s head. Everyone was extremely happy and jolly. Thankfully they were also happy for me to take pictures, which was brilliant because I couldn’t quite describe the scene and I’m not sure the photos will capture it either. 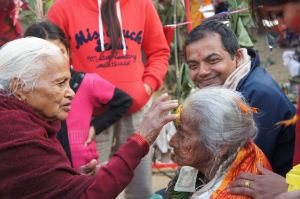 At this stage I was learnt that this was a celebration for the ladies 84th birthday. The 84th birthday is very auspiious in Nepal and cause for a great celebration. I had mistakenly thought this celebration was for the same Hindu day as the neighbours house.

Just behind where the Birthday Lady and her entourage there was a big hole of the in ground which held a smouldering fire. There were some other people were gathered around it, throwing what looked like rice into it, and chanting. A third area was covered in bowls of water, incenses, flowers and coloured paste. It was a bright and colourful seen with lots going on.

We were guided to move over to be back past the fire pit, ducking under the bright tinselly type flags handing around, and avoiding the fire pit. Once on the other side, a man walked round splashing water in everyones face and reading passages from a bookk. I took a few photos which children wanted to look at, and one other elderly lady with no teeth wanted to be in too. 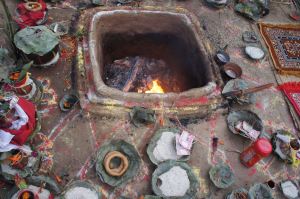 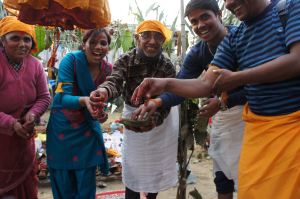 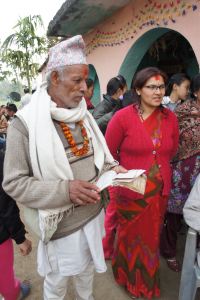 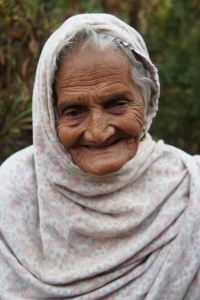 Again we were given some food, thankfully smaller portions this time, as it wasn’t long since we’d last eat but it would be rude not to take it. It was delicious again, but quite hot, Bisanti took a chilli off my plate and ate it, my lips were already tingling so I’m glad she did. As before, when we had finished eating it was time to leave. It is amazing how these people who really don’t have much have just welcome us, these perfect strangers into their how and fed us, not just once but twice today.

We managed to get back across the fields before it is dark, I keep my torch on me just in case but I’m glad I didn’t need it. We hang out in the gardens for a bit, waiting until after 7 to back to the neighbours for dancing. Unfortunately just before, a storm comes across, not major but thunder, lighting and rain none the less. We quickly move the radishes in that were laid out to dry and head to the children’s house. I play a game of word bingo which I brought with me and the girls are quite taken with. Some of the other girls get on doing some crafts which another volunteer must have brought over for the recently. Basinti explained that as it was raining the wouldn’t be any dancing. I was disappointed but understood and decided to head to bed about 8.30.

But whilst I was lying in bed I could here drums and singing.  I hesitated, I wasn’t sure whether to go or not but I really wanted to, it didn’t take me long to grab my torch and head out into the dark, and I am so glad that I did. You couldn’t see much to start with but as I approached the family spotted me and welcomed me in and gave me a chair. An older man came to chat, what country was I from, England, ahh a great country, so is Nepal I reply. There are lots of women sitting crossed legged on the porch area, some playing the drums, others a tambourine, or bells and everyone was singing. Another lady, with lots of coal eye liner on grabs me up to dance, oh god do I have to, yes I do! I manage a few twirls but I can’t do the amazing hand movements they can and sit down as soon as I can. I move off the chair before long to the edge of the porch where I can sit on a wall right by the ladies singing and playing.

Some children come over to me, they are fascinated by my head torch, which I had sitting beside me on red light. I take some photos of them and let a few of them take some pics, which they loved. The music keeps on, with people moving in and out of the small crowded space, children clambering over. Occasionally someone will get up and dance, men or women, or children – always with these amazing hand movements and great rhythm and only ever a few at a time. I stay for about an hour, I don’t want to over stay my welcome. 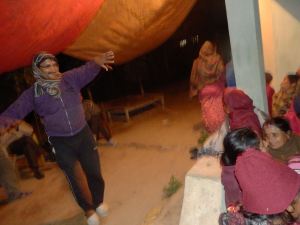 It really was an amazing experience. I had a big grin on my face the whole time, the music was hypnotic and everyone was having so much fun. The best thing was this was real, it isn’t touristy at all. I am incredibly lucky to have been part of it. What an extraordinary and amazing day in and around the Happy House.